So, today I’ll write in (a very bad, to be honest) English, just because I have to respond to this.

To my Italian-speaking readers, I published roughly the same thing on FB today at 13:00.

So, ex astronaut Terry Virtis shared an (actually quite good, but not perfect) article by Vox with this comment on it: 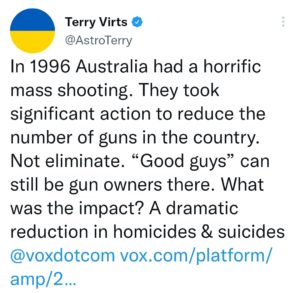 So, a lot of certainty, right? And he is, in the eye of the public, a scientist, so he must know the data, right?

Well, sadly (to him) the article he shared much destroys his entire point.

If you open it, after a story of the gun law in Australia, you’ll read basically two things:

First: after the reform, the number of murders with firearms dropped. We, in Italian, say “grazie al cazzo”, which could be translated to “thanks to the dick” in those cases where a consequence is obvious. If you don’t have gun you’ll kill somebody with another tool, if you want to. The whole argument for gun control is “without gun we’ll have a society less prone to violence”, not “they’ll start to kill each other with forks like savages”.

Second: what about the general rate of murders? The article mentions only the two years after the reform saying they had the greatest decrease in homicides, but then they stop and, in their conclusions, say there is no great proof of homicide reduction thanks to these reforms and that actually murder rates were falling even before the changes in the law. You could look at the statistics, if you want to. That general rate didn’t fell so much, just look at the US in comparison (but they started killing each other after the COVID pandemic, you know, tradition, I guess?)

So, btw, did those laws, according to the article, did actually something? Yes, in three areas:

In the first area, the resource I linked shows unequivocally that less guns means less suicides. Usually, those who shots themselves dies, while other ways have higher survival rates.

In the second area, there is no clear reference provided but their logical explanation makes sense: women are more likely to be killed in an abusive relation and if the killer has a gun, it’s more probable they’ll die than if they’ve a kinfe or their bare hands. By the way, we should make clear that in the US there are laws (and SCOTUS decisions) against known abusers having guns.

In the third area, mass shootings reduced in the country. The articles says usually mass shooters are a tiny fraction of the people, so if there are less guns, they’re less likely to get one and do their crimes. I’ll add we couldn’t actually now if they expressed their criminal intent in another, less recordable, way (such a kill some random people with a knife).

Then the article finishes saying there is no great evidence about gun control reducing homicides and that US and Australia has different political and cultural factors, so it may or may be not a solution but, clearly, should be kept in mind while studying the argument.

So, where’s all the certainty gone? There was no dramatic reduction in homicides, only in suicides. You could at least get the general direction of the data right, but you didn’t.

Do you understand when even “the magical model” best sources says “there is no evidence of what you’re saying’s true”, maybe you’re not talking with science in mind, but with ideology? And everything you says about that argument should be taken with a pinch, or even two, of salt.

This website uses cookies to improve your experience while you navigate through the website. Out of these, the cookies that are categorized as necessary are stored on your browser as they are essential for the working of basic functionalities of the website. We also use third-party cookies that help us analyze and understand how you use this website. These cookies will be stored in your browser only with your consent. You also have the option to opt-out of these cookies. But opting out of some of these cookies may affect your browsing experience.
Necessary Sempre abilitato
Necessary cookies are absolutely essential for the website to function properly. This category only includes cookies that ensures basic functionalities and security features of the website. These cookies do not store any personal information.
Non-necessary
Any cookies that may not be particularly necessary for the website to function and is used specifically to collect user personal data via analytics, ads, other embedded contents are termed as non-necessary cookies. It is mandatory to procure user consent prior to running these cookies on your website.
ACCETTA E SALVA